A travel reportage by Sonja Beier covering Slovenia in general and the dock worker’s strike in Koper in particular. [Deutsche Version]

Austria’s southern neighbour is a very diverse nation. Only here, at the northern edge of the Adriatic Sea, one can find a country with a Mediterranean shoreline in the south and west and high rising mountains up north, which is typical for the Western Balkans. Most of the people here speak English very fluently, and in some cases even German. The two million Slovenes are genuinely friendly folks.

Prices are lower in this EU member state compared to Italy, for instance. Petty crime seems to be inexistent. Slightly tardy buses aside, Slovenia appears to be a welcoming holiday destination. It’s popular among Germans, Dutch and Belgian tourists. 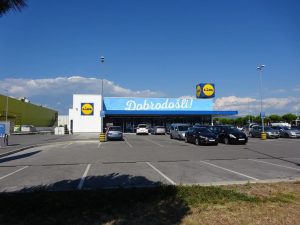 Germany isn’t only represented here by the vast numbers of tourists, but moreover by the ubiquity of German capital. If you don’t travel by car, you’ll probably enjoy „Slovenian“ inter-regional bus lines. In fact, Arriva, the biggest provider for public bus transport around and its subsidiary Alpetours (operating in the Julian Alps) have been bought out by Deutsche Bahn, Germany’s national railway company back in 2013. Arriva has expanded in the meantime and operates in 13 more European countries to date.

If you look forward to discover exotic shops, you’ll be disappointed to learn that it’s more of the usual: SPAR, Hofer and Lidl markets adjoin chemist’s shops of the DM chain. Naturally, typical Slovene groceries are available here, although the majority of goods is identical to the assortment found in German and Austrian supermarkets. Neither the wrapping nor the language differ. The former Slovenian retail company Mercator has been an affiliate of the mighty Croatian Agrokor corporation for years. Critical observation and online research are sufficient to realise that privatisation and foreign capital are spreading in Slovenia.

Lost in corruption and dirty businesses for 25 years

The decline of the welfare state and sell-out of local businesses have culminated drastically into the last dock worker’s strike in the coastal town of Koper. It took place in the month of June. Austria’s mainstream commercial media didn’t pay any attention to this events, as they always do when it comes to working class actions. “Luke Koper”, or Koper harbours are operated by the Slovenian corporation of the same name. 51 Percent of the ownership is in the hands of the Slovenian Republic. The managing board of the company planned to sell the port to foreign investors. Unsere Zeitung (UZ) visited the town with its 50,000 residents and exclusively talked to locals and the dock workers in particular.

A middle-aged toiler and a younger guy, probably his son, were sitting on a concrete block close to the commercial port. They looked surprised when told that an Austrian reporter was interested in the impending privatisation. The gentlemen wanted to remain anonymous.

Nevertheless, their English was good and they turned out to be well-informed about the subject, about the social problems and struggles around. Before examining the strike itself, the two men spoke about corruption that has been dispreading for 25 years. Circumstances have become tougher as the number of persons without a job rose to 130,000.

The decay of the welfare state in Slovenia is accompanied by many effects, as are the massive waves of privatisation multi- and international corporations benefit from. It’s no coincidence that these processes have accelerated in 25 years. 27 years ago, the Soviet Union began to dissolve, leading to the collapse of real socialism in Eastern Europe. All observers, even the most anti-communist among them, will admit that from then on, state properties were flogged for give-away prices to Western capital.

In Slovenia, socialism’s downfall and the following setback in labour conditions coincided with the Yugolsav Wars which began in 1991. Many displaced persons from all countries of former Yugoslavia came here to work as low-wage earners ever since.

By June 2016, it was about time for “Luke Koper” to be sold to international companies. The elderly toiler told us about the process that resembles the sell-out of the Croatian port of Rijeka.

“They’ll replace us soon with cheap workers from China and other countries. We’d all loose our jobs, although Slovenia is already grappling with high unemployment. What’s more, they’d reduce security standards like wearing a helmet.”

As Koper is a free port, there are no strict governmental regulations concerning work safety, he added. From his point of view, standards of wage and labour are being constantly undermined in many branches. When told about similar developments in Austria, the gentlemen did not seem surprised, stating that “There is a big wave of privatisation around the whole world“.

But the dock workers remain defiant. United they strike, organise and link. Around 70 percent of all employees are members of the “Sindikat Žerjavistov Luke Koper“, the local union. Still, the union didn’t interfere much with the last strike and the blockage of the port, which were by and large autonomously executed by the workers. The latter have been connecting with colleagues abroad. In the port of Trieste, for instance, a token strike and solidarity rally took place in favour of “Luke Koper” workers. The port strikes in France were closely observed by the workers in Slovenia. These measures caused an estimated loss of € 700,000 per day.

“They have the right to fight for bread”

“Nobody cares about us”, the old worker in Koper said. When saying nobody, he thinks about the current shareholders of the company. He indicated that they only think about business and prepare for the time after the sell-out. Furthermore, the gentleman believes the shareholders have been bribed.

It’s safe to say that militant workers are a thorn in the flesh to them, as they are endorsed massively by the Slovenian people. On 28th June, for example, Koper’s labourers were joined by large numbers of locals in a rally. An estimated 5,000 people participated in the protest.

All of the interviewed pedestrians told UZ that they had followed the strike via television. A resident of the port district said: “Opraviceno se lovi jo za svoj kruh”, which is a Slovenian proverb, roughly translated as “They have the right to fight for bread.” A young Slovene couple on vacation in Koper complained about the privatisation and sell-out of local businesses. “It’s good to see that finally somebody opposes this trend. We support the strikers.”

Though, there are also other perspectives on this lefty picture-postcard. A pub owner rejected talking to us about the protests. He was annoyed and did not want to respond to our questions on the events in “Luke Koper”.

“The price for a cup of ice cream has tripled”

As is known, the standard of living does not only depend on one’s income, but also on the amount of goods that can be exchanged for it. On the way home from the heroes of labour, further north, a young taxi driver told UZ that ever since his country joined the EU and the eurozone, a lot has changed in Slovenia. Within a decade, prices for many groceries – e.g. a cup of ice cream – and other everyday commodities have tripled, according to the chauffeur.
Hasn’t Slovenia benefited from the transition to capitalism and its membership in the EU? “Not really”, the driver answers, “The average wage has risen by € 150.”

Which side are you on? 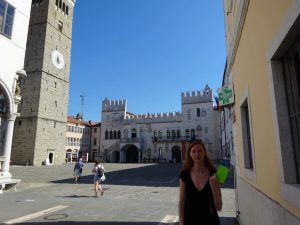 To summarise, only few benefits of the past two decades‘ economic and social developments arose for Slovenians. They lead to different outcomes, either insecurity or annoyance or, as reported, to straightforward industrial action. As a consequence, further measures will not only depend on resolute defiance against the management of “Luke Koper”, but on fencing off nationalists who try to misuse the strikers‘ cause. As the little, mountainous country has been affected by the current refugee movements, too, right-wing populism may be on the rise. Therefore, foreign investors must not be regarded as foes because of their country of origin, but because they will certainly worsen the on-site-working conditions. What is more, Slovenian investors can be as exploitative and corrupt as foreign capital.

By now, red flags and partizan songs dominate the picture of Koper’s strikers. That is why luckily it seems that the dock workers won’t become enslaved by nationalism soon.

Thanks to all who provided me with information for this report, especially the elder toiler. All the best for upcoming struggles! Hvala lepa.
I highly recommend this labournet video which documents some of the protests in Koper. 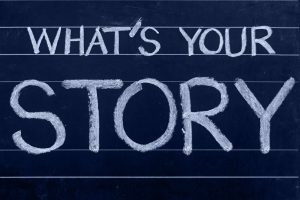 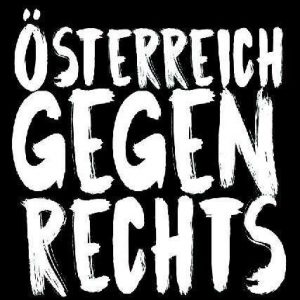